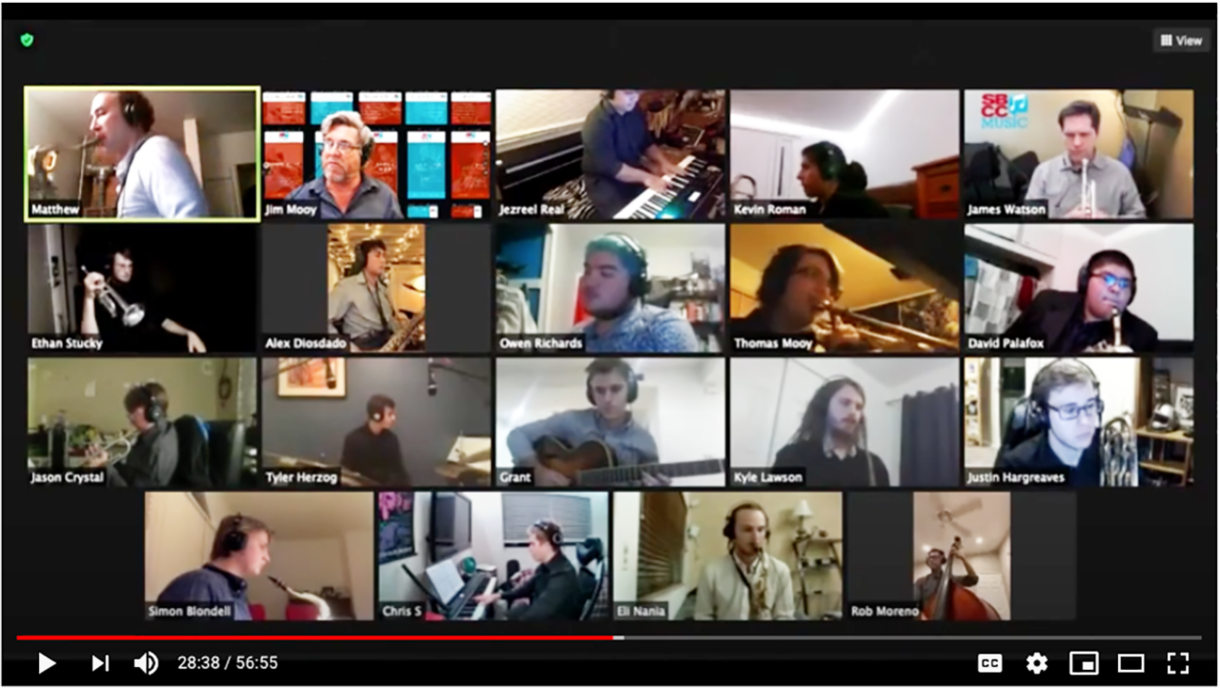 On Oct. 23, 2020 at 7p.m. Pacific Time, the Santa Barbara City College Lunch Break Big Band became the first school band in the world to present a live concert of a large ensemble with each member participating synchronously – and safely – from their homes.

Plans for such an event had their beginnings last March, when large gatherings indoors were suspended due to the COVID-19 pandemic. Since then, programs from all over the United States have been watching SBCC Music as they experimented with a new technology that enabled them to rehearse and play together online.

Until now, it was impossible for musicians to play together over the internet. The structure of the World Wide Web, based on reliability rather than instantaneous speed, causes audio and video to be slightly out-of-synch. Even a half-second delay in sound makes it impossible for musicians to play together with rhythmic precision.

Seeking ways to surmount that obstacle, SBCC’s James Watson and Jim Mooy discovered Jamulus, a new software developed in Germany by Volker Fischer and a team of volunteer engineers who recognized the need for musicians to collaborate remotely in real-time. Although Jamulus helps remedy the problem facing large groups wishing to perform together, using it is not without its challenges. Each musician must plug directly into their internet router and every player must also have specialized audio equipment (audio interfaces, microphones and cabling). In addition, a robust local server is needed to keep transmission distances to a minimum.

With the help of SBCC Business Services, the SBCC Music Department was able to obtain CARES Act funding to purchase the necessary equipment for each student. Yamaha Silent Brass systems were provided to those students living in apartments, allowing their louder sounds to only be heard electronically and not by their neighbors.

Summer was spent testing the technology among 40 SBCC Concert Band and Symphony Orchestra members. After reporting the positive result to the software developers in Germany, Mooy enlisted the help of SBCC’s IT department to create a custom Jamulus server and six private virtual rehearsal rooms where the students could connect. Cox Cable stepped in and offered a reduced rate for the type of modem that provides the fastest possible connections.

Finally, a week before the first day of the Fall semester, band members logged into Zoom for visual contact, while simultaneously using SBCC’s Jamulus audio server for its higher fidelity sound and speed. Although they played a few notes timidly at first, before long they sounded as if they were all on the same stage.

As Mooy described the experience, “By the end of the rehearsal we had played two new pieces from beginning to end, complete with improvised solos, and all in real-time. It was a moment of near-normal.” Subsequent rehearsals, according to Mooy, “were even tighter” adding that during one of them, “We tried a more modern piece that the band dug into on the first reading. What a thrill!”Click here to watch the Oct. 23 performance.

No other academic institution in the world has attempted this with 20 or more musicians; the three SBCC jazz bands are the first. Mooy has been contacted by UCSB, Riverside City College, Azusa Pacific University and numerous high school directors for details of SBCC’s online music rehearsals.

Future plans for SBCC Music include participating in the Jamulus World Jam event, and combining live video from Zoom with the audio of Jamulus while broadcasting live events on Facebook, Twitch and YouTube. For more information about the SBCC Music Department, visit www.sbcc.edu/music.